In this article I’ll discuss about Law of Demand:

1. Introduction to the Law of Demand

2. Assumptions of the Law of Demand

Introduction to the Law of Demand:

On the figure, it is represented by the slope of the demand curve which is normally negative throughout its length. The inverse price-demand relationship is based on other things remaining equal. This phrase points towards certain important assumptions on which this law is based. 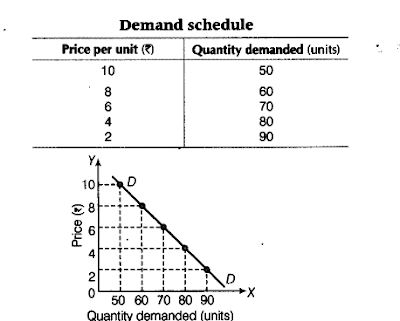 Assumptions of the Law of Demand:

1. No change in habits, customs, and income of consumers:

Law of demand tells us that demand goes with a fall in price and goes down with a rise in price. But an increase in price will not bring down the demand if at the same time the income of the buyer has also increased.

2. This law does not apply on necessaries of life:

It is assumed that this law is not applicable in the case of the necessaries of life. Because an increase in the price of flour will not bring down its demand. Likewise, a fall in its price will not very much increase the demand for it.

Law of demand does not hold goods in case of those goods which confer social distinction. When the price of such goods goes up, their demand shall also increase. For instance, an increase in the price diamond will raise its demand and a fall in price will lower the demand.

5. Fear of shortage in the future:

If there is a fear of a good in future its demand will increase in the present as people would start storing. But according to the law of demand, its demand should go it when its price falls.

6. Change in the price of a substitute:

This law does not apply in the case of tea and coffee, because these goods are substitutes for each other. When the price of coffee goes up the demand for tea shall increase although there has been no fall in the price of the tea.

7. Fear of a rise in price in Future:

If the consumer thinks that the price of particular goods will increase in the future, they will store it. In other words, the demand for those goods shall increase at the same price. But this law states that demand should go up only of price falls.

It is possible that a consumer may not be aware of the previous price of a good. In this case, the consumer might start purchasing more of a commodity when its price has actually gone up. A new approach called the ordinal utility approach, developed by Edgeworth, Pareto. Slutsky, Johnson, Hicks, and Allen are easier and more helpful in solving the problem of consumer’s demand. The ordinal theory not only requires fewer assumptions but possesses greater predictive power then does its cardinal cousin.

The assumptions of cardinally measurable utility have been dispensed with not because the utility is not cardinally measurable, but simply because such measurement is not at all required for analyzing consumer’s behavior. The points of distinction between the cardinal and the ordinal measure of utility.

Some other assumptions of the law of demand : 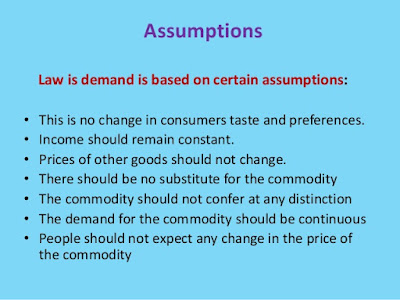 The exception to the law of demand:

The following points highlight the six important exceptions to the law of demand.

In a speculative market(such as the stock market), a rise in the price of a commodity(such as a share) creates an impression among buyers that its price will rise further. So people start buying more of a share when its price rises. This is not truly an exception to the law of demand in the sense that the demand curve here is not upward sloping.

Hence, there is no movement along it from left to right. In fact, in a speculative market, we see a shift of a normal downward sloping demand curve- people buy more at the same price. Some people wrongly refer to this as an exception because they get confused between the two issues- movement along a demand curve and shift of the demand curve.

People sometimes buy certain commodities like diamonds at high prices not due to their intrinsic worth but for a different reason. The basic object is to display their riches to the other members of the community to which they themselves belong.

This is known as ‘snob appeal’, which induces people to purchase items of conspicuous consumption. Such commodity is also known as Veblen good(named after the economist Thorstein Veblen) whose demand rises(fails) when its price rises(falls).

This is a genuine exception to the law of demand. The demand curve for such as item will be upward sloping(fig. 2.3). Thus if the price of diamond falls, people will buy less of it. In a word, purchases value diamonds and other costly items because of their prices and because of the psychic satisfaction that they derive from it. 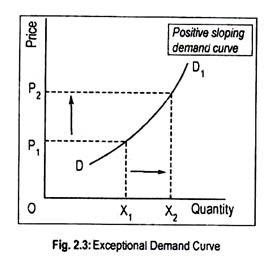 3. Using price as an Index of Quality:

Most consumers do not have the capacity or technical knowledge to examine the physical properties of a product(such as reliability, durability, economy, etc.,) as in the case of an item such as a motor car or a VCR. so, in the absence of other information, the price is taken as an index of quality. Thus, a high-priced car is more valued than a low-priced one.

A costly book is often considered to be more useful by a student than a cheaper title. In such cases, the demand curve may be upward sloping. This argument is not a new one. This applies to our previous case where we referred to commodities having snob appeal. so this point really reinforces the previous one.

A ‘Giffen Goods’ is a special variety of inferior good. Sir Robert Giffen of Scotland observed in the 19th century(the 1840s) that poor people spent the major portion of their income on a staple item, viz., potato. If the price of this good rises they will become so poor that they will be found to spend less on other item and buy more potatoes in order to get a minimum diet and keep themselves alive.

For such goods, the demand curve will be upward sloping. It will look like the supply curve of a commodity of fig. 2.3. note that this is a very exceptional case and potatoes that we consume today should be considered as ‘normal good’ rather than Giffen good.

5. Possibilities of Future Rise in Prices:

In all eh cases mentioned above, the demand curve DD1 exhibits positive slope as shown in fig. 2.3. At a price OP1, a consumer demands OX1 of a commodity. As its price rises to OP2, demand also rises to OX2. Thus, the law of demand breaks down.

Finally, in the case of certain highly essential items such as life-saving drugs, people buy a fixed quantity at all possible price. Heart patients will buy the same quantity of ‘Sorbitrate’ whether the price is high or low. Their response to the price change is almost nil.

In cases of such commodities, the demand curve is likely to be a vertical straight line(Fig.2.4). At a price OP1, the heart patient consumer demands OD amount of ‘Sorbitrate’. In spite of its price rise to OP2, the consumer buys the same quantity of it. 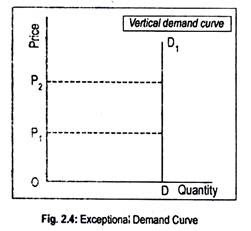 I hope that you all will like this post and I hope that it helps you a lot.